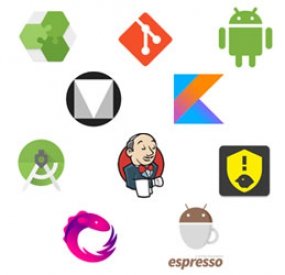 Resources for Getting Started with Modern Android Development

After putting together resources for the Mobile Developer Graduate Program that we run at DVT, I realised that the content I referenced could be a great guide for getting started with Android development.

It is worth noting that we have a very hands-on approach to training the graduates at DVT. We run workshops as well as practical projects to ensure our graduates have a solid understanding of Android development.

With the vast amount of content available online, when I started Android development I didn’t really know where to look or what I should be aware of when developing an app. Having a concise list like the one in this blog post would have been invaluable for me when I started out. I hope you find value in it too.

Here is a list of links, code labs and reference material that would be useful for any developer that wants to get started in the world of Android development.

The following general programming practices are key to getting started with your successful career in development. These practices include:

There are a bunch of websites that provide the basics of getting started with Android development. My recommendation is to follow the official documentation to understand the basics and then look to other resources (such as blogs etc) for additional information as you get into the more technical aspects of your application design (see the sections referenced later in this post).

Some getting started resources:

Working with Gradle is probably something that gets overlooked when developing Android apps. Make sure you understand the basics, even better — learn how to write your own gradle tasks!

Although most of the Android documentation doesn’t reference Retrofit or OkHttp, these are the most commonly used libraries when it comes to networking in Android. It is also good to be familiar with the different profiling tools available in Android Studio.

Unfortunately, writing code and getting your app to compile isn’t the end of knowing how to write a maintainable Android app. Large scale Android applications need to follow good architectural designs in order for them to be maintainable and testable. There are many different patterns you can follow when writing an Android application. Patterns such as MVP, MVVM and Clean Architecture are commonly used. Make sure you understand the differences between the patterns as you will encounter many different patterns in the wild.

Once you have gotten the hang of creating Android apps, you will need to think of how to test them. Unit testing and UI testing are very important concepts that you need to make sure you understand. There are plenty of different tools you can use to write UI tests. Most Android developers use Espresso and JUnit to write tests but there are many other tools out there such as Robotium, Calabash, Appium etc. I would recommend using Espresso and JUnit.

Great, you’ve made it this far! Now there are a few concepts you will need to cover in order to release your application:

There are plenty of things that should be done in order to secure your application and make sure no one gains access to unauthorised content. Make sure you are using ProGuard (mentioned earlier). Understand what a Man in the Middle Attack is. Understand different encryption methods and ways in which you can securely store information inside an Android App including securing your API Tokens, certificate pinning etc.

Once you have covered all the basics of writing Android applications, there are a few advanced topics that you might need to cover in order to contribute to some codebases:

Keeping up to date with Android Development

There are a multitude of ways to keep up to date with the latest changes and developments in the Android Community. Some of the ways I find useful:

There are many concepts you will encounter as an Android developer, such as working with notifications, widgets, themes and styling your apps etc. This list covers the main topics that I feel are necessary in order to be a great Android developer, most of the other topics can be understood as you go.

I hope this list of resources helps you on the path to becoming a great Android developer. Let me know on Twitter if there is something you feel should be added to this list!